5 Reasons to Hire and Promote More Women in Leadership Positions 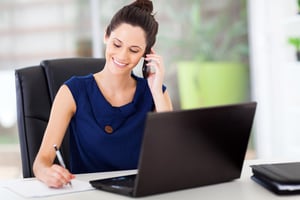 Do companies benefit from having more women in leadership positions, and if so, why?  The answer according to a host of recent studies is an unequivocal "yes."

CEOs who are more concerned about the bottom line than the nuances of workplace culture should know that businesses which hire and promote women to leadership positions make more money.  According to Medium, for example, businesses with more women at the top are more profitable:

"A 2016 survey of 21,980 publicly traded companies in 91 countries concluded that 'the presence of more female leaders in top positions of corporate management correlates with increased profitability of these companies.'  This confirms what study after study for more than a decade have found — that having increased female leadership on your team or board leads to increased financial results."

Of course, that doesn't necessarily mean that companies which are lagging in the diversity of their leadership team will immediately become more profitable once they begin hiring and promoting more women.  It does mean that companies which create and sustain effective strategies to achieve greater workplace diversity will, on average, become more profitable over the long haul.  Said differently, creating a diverse workforce at all levels is quickly becoming essential to business growth and success.

What Qualities Do Women Leaders Bring to the Table?

Those several studies highlight the metrics which demonstrate a correlation between a more diverse leadership team and profitability but say little about the reasons this is the case.  The question for forward-leaning businesses is, "what characteristics do women possess which will help me drive more sales and grow in the present business environment?"  For the answer to that question, one must review the findings of more qualitative analyses which demonstrate specific ways in which women leaders help transform organizations, including the following 5:

Spoiler alert:  men and women are different, and those differences are apparent in the ways they manage positions of leadership and approach problem solving.  For example, women leaders tend to be more sensitive to issues of fairness and equality in the workplace.  When only men are present in critical meetings, those issues are more likely to be overlooked, and as a result, solutions more likely to be myopic.

According to one recent study (Global Leadership Forecast 2014–2015), for example, including women in the C-suite leads to greater diversity of thought, which in turn eliminates the blind spots which can cause critical errors.  Stated differently, when women are absent from critical decision making, decisions are more likely to be based on inadequate advice and guidance, and for this reason to be flawed or incomplete.

2.  Trust Is the New Gold Standard

Employees who believe in and trust the companies for which they work are more productive, loyal and engaged—and that translates into increased retention, something increasingly important as the country approaches full employment.  A recent study from Pew ("Women in Leadership") found that women leaders are perceived as both more honest and more ethical than their male counterparts, and for this reason more trusted.

How important is creating trust among your employees?  A recent UK study from Bupa research concluded that it's critically important.  More than 50% of employees surveyed by Bupa said that trust was a "major factor" in helping them decide if they remained in their current job or left for another; and almost 1 in 4 reported they had left a job specifically because of issues related to trust.

3.  Collaboration Is an Increasingly Important Factor in Business Success

Increasingly, the businesses which are successful are the ones which are breaking down silos, emphasizing teamwork and prioritizing collaboration.  A recent study from Quorum about the U.S. Senate reinforced the perception that women are in general more collaborative than men.

The study found that female senators were substantially more collaborative than male senators, co-sponsoring on average more than 6 bills with another women, while the men co-sponsored on average only 4 with another male senator.  They were also more likely to reach across the aisle and work with senators from the other party.  Women bring that tendency to be more collaborative to more than politics—it's equally apparent in business.

Among the several factors which create more effective onboarding of new employees, skill growth and employee retention is the presence of a trusted mentor.  In another study from Pew, 30% of surveyed employees stated that in general women are better at mentoring than men; only 5% said the same about men.  Employees who have access to a mentor who makes herself available and provides valuable guidance and advice are more satisfied and loyal.

5.  Today's Women Are Achieving Higher Levels of Education Than Men

If you care about the educational level of new employees (you should), hiring more women will give you a definite leg up.  That's because women entering the workforce in the 21st century are better educated than their male counterparts.

According to another analysis from Pew, for example, almost 40% of women are now starting their careers with at least a 4-year degree compared to just 31% of men, and they're completing a more diverse set of courses.  That means they're more likely to be conversant with the latest developments in their field, and less likely to require substantial additional training.  It also means that women are devoting more time and energy to the career choices they make, and are therefore more likely to choose companies that fit their career ambitions and goals.

As the American economy grows and the unemployment rate drops, companies to be successful and profitable must pay greater attention to worker satisfaction, productivity and retention.  That means achieving a greater understanding of what's most important to your employees, like career advancement, job satisfaction and professional growth.

It also requires businesses to provide their employees with the requisite tools and training to be successful.  To learn more about the ways our leadership training and employee development services can increase profitability and help your business grow, contact us today.

Watch our recorded webinar "Discover the 4 Leadership Skills You MUST Possess Today" to find out the four most essential skills needed to profoundly impact today's workforce.