Understanding Benefits of Optimism in the Workplace 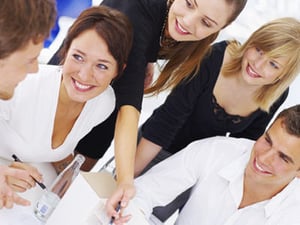 We all know the difference between optimists and pessimists. In fact, we probably all work with a healthy mix of both. And, if recent studies are to be believed, pessimists are significantly outpacing their more positive counterparts in the workforce.

One recent study found that 75% of workers believe they are more stressed than the previous generation. Others are finding that pessimism is becoming increasingly common in both personal and professional environments.

That's too bad, considering the benefits of a more positive outlook. Optimism doesn't just make for a more pleasant co-worker; in reality, it can drive your entire company forward. Once you understand the benefits of optimism in the workplace, working towards a more positive and forward-facing environment becomes a natural next step.

The Benefits of Pleasant Co-Workers

Let's begin with the obvious. Simply put, working with colleagues who feel positively about their work makes an impact in how each of your team members feels about themselves and their own impact. Consider the benefits of happy employees:

Employee happiness and optimism aren't synonyms, but they are closely related precisely because of these interpersonal relationships. It's only natural to draw the connection between optimism and a more pleasant team relationship. Build and encourage one, and the other is likely to follow.

The Contagious Nature of Optimism

You might have heard that optimism is contagious. As it turns out, science actually backs up that fact. One optimist, especially if that optimist is also an extrovert happy to share their opinions and emotions, can quickly take over an entire team or department.

Researchers have been studying this phenomenon for years. According to a recent NBC News article, Harvard Medical School professor Nicholas Christakis

found that happiness may be a collective phenomenon: Having a happy spouse, or a friend or neighbor, who lives within a mile of you appears to increase the probability that you will be happy as well.

The same thing is true at work--but it also extends to the opposite end of the spectrum. A team of optimists will drive each other to be more positive, exponentially multiplying the benefits discussed throughout this post. A team of pessimists, on the other hand, can drive those same benefits down.

The Upward Motion of Optimists in Your Company

Optimists tend to have more successful careers than pessimists. As a recent Harvard Business Review article pointed out, they are 40% more likely to get promoted, six times more likely to be engaged at work, and five times less likely to burn out than their counterparts.

Those are significant numbers for the health of your organization. We all know about the dangers of turnover, and the reasons for that turnover match up very closely to those factors above.

Your employees leave because they feel stuck, they're disengaged, or they're burned out. Optimists, by combating these very factors, don't just improve their own careers but help to build a more stable organization.

The Solution Focus of an Optimism Mindset

Optimism, crucially, does not mean delusional. At its best, it does not ignore problems and challenges in favor of rosy predictions and thoughts about the future. Instead, it embraces these challenges with a can-do mindset that drives towards solutions wherever possible:

A rational optimist is able to see reality for what it is, while maintaining the belief that actions can improve the situation. This solution-focused mindset propels positive action.

Combining positivity with a belief in the ability to improve things that aren't going according to plan is vital for organizations to survive and thrive. It allows for a proactive approach in the face of challenging environment during growth and maturity periods. On a micro level, it's probably also why studies have found that optimistic sales professionals (who often deal with challenging situations) consistently outsell their more negative counterparts.

The Connection Between Optimism and Persistence

When trying to understand just why some people are more optimistic than others, researchers have made a somewhat surprising discovery: as a general tendency, optimists just refuse to give up.

They're more likely to stick to a chosen path even in the face of challenges, because they believe in its success. When something doesn't go according to plan, they're less likely to give up and more likely to choose an alternative path to success.

That's because, above all, optimists are less likely to second-guess themselves. A positive outlook is inherently connected with a confidence that their choices and general direction is the right one. That can go too far, but at its core, it's a core component of any organization's ability to grow and thrive in challenging environments.

How Can You Drive Optimism in Your Work Environment?

Persistence, a solution-focused mindset, and a positive impact on your entire organization undoubtedly sound tempting. Now comes the challenging part: how can you encourage optimism throughout your organization and corporate culture?

The answer is not always easy. However, a strategic approach can go a long way towards achieving this goal. That starts with simple things you can do to increase employee happiness, such as:

It doesn't end there. Another component of turning general happiness into optimism (and vice versa) is making sure that your teams are given at least some freedom to find their own solutions, and let their creativity play. It also pays to pair some of your optimists with less positive employees to drive a cultural change over time.

Not all of that can be done in isolation or without training. It's not always natural for a pessimist to simply turn around their mindset, or even for a self-proclaimed realist to become unconditionally positive about the future. Fortunately, we can help you move in the right direction.

Contact us to start talking about training opportunities. Allow us to help infuse a positive, optimistic mindset into your organization's culture and drive its productivity.

Susan Cullen, President of NexaLearning was a guest speaker on the "Let's Talk Sales to Increase Your Income with Len and Jack" radio show sponsored on Voice America.  She discussed research behind Learned Optimism and shared techniques with listeners that anyone can use now.